We'll be hosting a FREE event on Sunday, October 24th in Market Square, Downtown Roanoke from 12 pm - 3 pm with free products, free t-shirts, and other goodies while supplies last!

See you there and thank you Roanoke for the years of Dr Pepper love!

“Drink a Bite to Eat at 10, 2 and 4” was a legendary slogan used for decades to remind Dr Pepper fans to enjoy their favorite “pick me up” at three intervals during the day when research showed human energy to lag. Now Roanoke is celebrating “10-24” as “Dr Pepper Day” with a free downtown event Sunday, October 24th from 12 p.m. to 3 p.m.

The event will feature free products and t-shirts while supplies last.

The original Dr. Charles T. Pepper opened Dr. Pepper's Drug Store in Rural Retreat in the late 1800s. A young man from Christiansburg named Wade Morrison worked at the drug store and eventually left Rural Retreat for Waco, Texas. There he and his partner opened a drug store of their own and began selling a new drink Texans could not get enough of. They named the drink Dr Pepper after Morrison's old boss in Virginia.
In 1936 Bill Davis opened Virginia’s first Dr Pepper Bottling plant on McClanahan St. in Roanoke. Roanokers consumed more Dr Pepper per capita than any other place on earth from 1957 to 1959 and again in 1961! To this day, Roanoke has among highest per capita consumption rates in the US.
Dr Pepper and Roanoke have a “One-of-a-Kind” relationship with the large, historic, and iconic Dr Pepper sign that can be seen for miles and have supported community events with the addition of Dr Pepper Park at the Bridges. Dr Pepper has been a great contributor to the community for over 80 years and the company is excited to celebrate that relationship with Dr Pepper Day on October 24th. 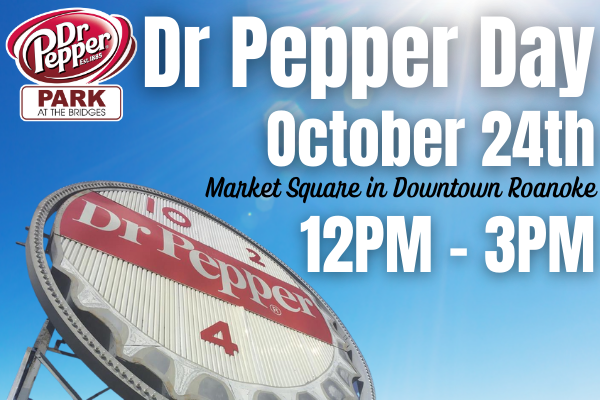